The genus Passiflora is widely distributed throughout tropical and subtropical America, southeastern Asia, Malesia, Australia and extending eastward in the Pacific to Samoa,Tonga and Niue.There are about 500 species in the genus many of which are cultivated as ornamentals or because of their edible fruits.There are eight species of Passiflora represented throughout the Fijian archipelago of which two are indigenous and the other six are cultivated and/or naturalized.The name Passiflora, or passion flower, is derived from the observation of the shape or form of the flower parts by early Spanish missionaries/explorers, bore signs of the passion of Christ.

Three of the more comport occurring species are highlighted below:

It is native to tropical America and now widespread in other tropical countries. In Fiji it is a scrambling and twining vine that naturalizes as a weed along roadsides and in coastal thickets, patches of forest . and cane fields from sea level to about 500m above sea level.The stems and lobed simple leaves are hairy with coiled axillary tendrils. The inflorescences have a distinct red tinged floral bract with white petals together with rich blue or Clef White corona fibrnents at the base and distal ends,respectively. This variety produces a yellow to orange.

Passiflora maliformis is a climbing vine that is native to tropical America. It is an introduced ornamental species
to many other tropical countries where it is cultivated and becomes naturalized. In Fiji it is sparingly naturalized
from near sea level where it scrambles over forest edges and in thickets with yellow to white flowers in lotches of red or purple whose corona filaments are banded in purple or white.The fruit is yellow-green and becomes purple when ripe. It is generally known as Hardshelled Passion Fruit but some locals refer to it as qaranldlla, a name that is more appropriate for the larger Passiflora quadrangularis or Granadilla.The ripe fruit is edible and is commonly used as fruit drink.

Passiflora edulis is native to Tropical America and now widely cultivated and commercialized in other tropical countries. In Fiji is cultivated and sparingly naturalized vine found from near sea level to an elevation of 700m. This species bears inflorescences with white petals and corona filaments that is proximally pink °C purple and distally white, and also bears edible fruits that are yellow to purplish when ripe. It flowers suits in February and November and is known to loamy Passion fruit.

A variety or cultivar of the species P. Referred to as “Nancy Garrison” is also coed and used as Quit drinks or food.The frumps when ripe and is reckoned Ripe superior taste by some.

Bananas are a tropical plant that has long been a mainstay of Fiji’s subsistence and economy. In botanical terms, bananas are a kind of ‘herb’, rather than a’tree’, their resemblance to palms being purely coincidental: the apparent trunk is a’pseudostem’, composed of the layered bases of the leaves.AII bananas belong to the genus Musa of the family Musaceae, but further classification has been the subject of much discussion among botanists, since most edible varieties are hybrids. One thing though is certain: that all Fiji bananas have a taste far superior to that of the insipid artificially ripened kinds that make it to the supermarkets of temperate climes.

Bananas can grow to 9 metres in height and produce a striking deep red male flower (soba in Fijian), which hangs down in most species, as illustrated on the cover.The groups of female flyovers that follow eventually become the fruit. Since there are no seeds, bananas are propagated by means of offshoots from the base of the ‘mother’, known as ‘suckers’ (suli-na).

While it is generally agreed that bananas originated from and were first domesticated in South and South-EastAsia, some botanists argue that they were also present in the Americas before their discovery by Europeans, though how they arrived there is by no means certain.

For many years during the early and mid twentieth century eating bananas were a major export of Fiji, being regularly shipped to New Zealand, and provided the first source of monetary income Or many Fijian villagers.The major causes of this industry’s decline were a tariff imposed by Australia to protect the Queensland banana industry, tub ravages of hurricanes, and a fungus that attacks the leaves that has become known as the ‘Sigatoka disease’- named after the district in Western Fiji where it was first identified, in 1912.

Apart from producing fruit, some bananas produce a fibre which has numerous uses, including forming the noose of mangrove lobster snares, and the sticky substance at the base of the’trunk’ is used to bind together the components of the bait used in woven fish-traps. The leaves are used fresh as platters at traditional feasts and as covering for food being cooked in the earth oven, and heated to make them supple for use as containers for various cooked foods.When dry and withered (suluka), they are used as cigarette-paper.The trunks are used for animal fodder, bound together as rafts, and also chopped up to provide a bed for food being cooked in the earth oven, to prevent it being burned by direct contact with the hot stones.

Four types of banana are included in this set, ranging from the edible when ripe to the edible when cooked, to the merely ornamental. One (Audi) is an aboriginal introduction to Fiji, while the other three are post-contact introductions.Another aboriginal introduction, the soaqa (Musa fehi, Musa troglodytarum), which grows wild in the forests of the larger islands of Fiji and Rotuma, and has blood-red to purple sap and large, red, slightly acidy fruits that grow erect rather than hanging down, is not included in this set Also to be noted is a later aboriginal, or maybe early European, introduction Clamant, pal<a, pate, Musa ABB)

Jalna (eating banana, Musa sapientum, Musa nana, a variety of Musa AAA).As its Fijian name suggests, this banana originated in China. It was brought to England and then missionaries of the London Missionary Society introduced it to Samoa, and took it from there to various islands of the Pacific including Tonga and Fiji,where it arrived in 1848.The veimama variety of this banana was the one that was regularly exported to New Zealand during the twentieth century, grown mainly in the hills of eastern Vitilevu and transported downstream on bamboo rafts (bilibili).

Jalna senlkau (pink banana, Musa velutina).This ornamental, probably of Indian origin, has bright pink inedible fruit that stand erect, unlike most bananas which droop. It is a fairly recent introduction in Fiji, as indicated by its not being listed in the mammoth five-volume Flora Vitiensis Nova of AC Smith. It is found in some urban gardens, and has spread to rainforest in various places, includingTaveuni, Ovalau,Wainibuka, and the northwestern outskirts of Suva.

11ganlmarama (lady-fingers or ladies’ fingers,a variety of MusaAAA).These were introduced in the late nineteenth century and have become very popuar eating bananas, being short and plump – hence the name – thinskinned and easy to peel, and deliciously sweet.

vudl (plantain, cooking banana, Musa MB). This was an early aboriginal introduction, and there are something in the region of thirty varieties in Fiji. Despite being called ‘cooking bananas’, some varieties, such as the vudAvaiwai, are perfectly edible when ripe.

The variety illustrated here is the mami.Vudi can be boiled or baked and eaten as a starch food, or made into fermented food (madras) to be kept underground as emergency supplies for times of famine, or cooked ripe and combined with grated coconut and coconut cream to make the delicious dessert vakasoso which, as the German botanist Berthold Seemann was moved to write in 1860, “on account of its goodness and rich sauce of cocoa-nut milk, has found its way even into the kitchen of the white settlers.” 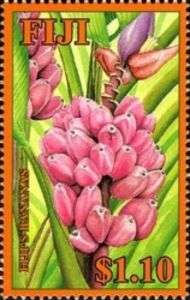 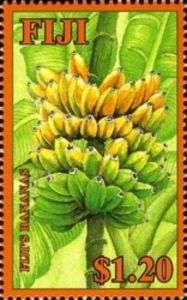 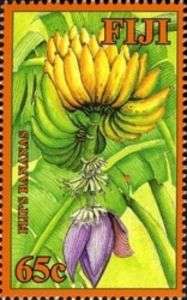